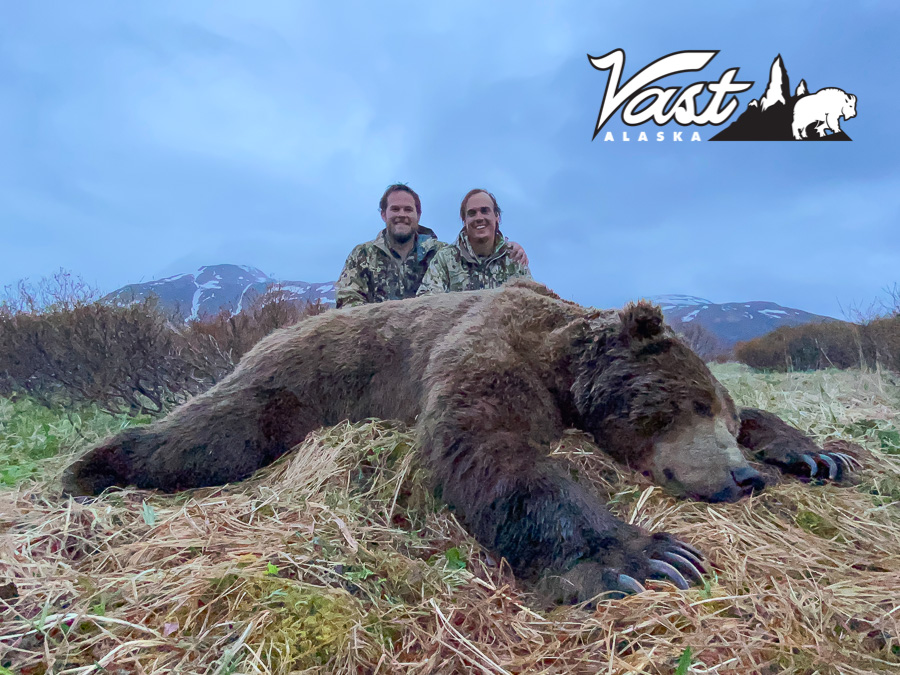 This Coastal Brown Bear Hunt took place on the shores of the Alaska Peninsula. The combination of a seasoned Veteran and one of our own hearty guides made this dynamic duo. From the onset of Chris VanSant´s arrival we knew we had a good match of abilities. Both are tough enough to cross the Alaska Peninsula with a meager rucksack while eating finger nails. We set the stage, the locale is a high producing valley approximate to the coast of the Pacific. The transportation was Neacola Mtn Air´s 2 Super Cubs sitting on 35″ turf bouncing wheels and 3″ extended landing gear. The food was not of a concern, like I said before, this Duo could live of what they found as if they were the quarry they hunted. As Guide Dan Watson would say “Its just another Coastal Brown Bear Hunt in Alaska”.

How it went down, loaded for Brown Bear they kept their eyes on the prize through high powered binoculars. When you are on the shores of the Aleutian Range you can’t help but revel in your good fortune. The MountainScapes and unending wilderness add to the relief from the modern day monotony.

After weathering a storm they spotted a Boar worth taking, heavy on the pad he ambled off the flanks of a mountain. Quick to make a plan is essential when you are intercepting a Brown Bear with one thing on his mind. So they tactfully manipulated the situation to a vantage of boot tangling willow. In a field of view that no one could pass up, was an unaware Mature 10 foot Boar. His line of sight was not their own, oblivious to the hit that was about to take place, the warrior fell, 18 years wearing the clothes on his back and waiting for his food to grow, peacefully he passed. Only on a Coastal Brown Bear Hunt in Vast Alaska.

Its about time that Vast Alaska writes about the Best Rifles for Alaska Brown Bear....…