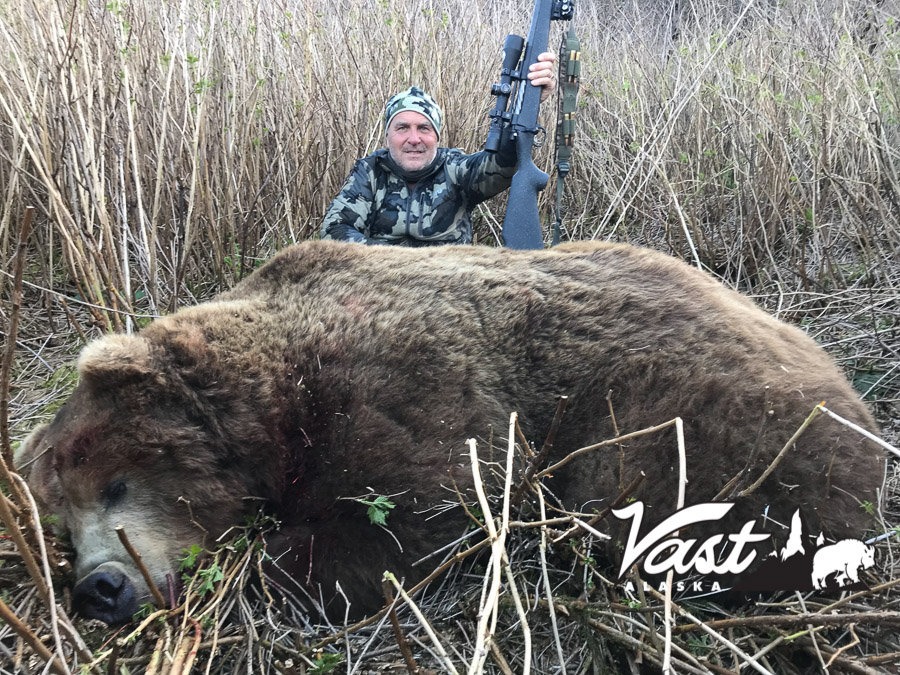 Boone & Crockett Brown Bear are some of the biggest Brown Bears in the world. They demand respect as a hunter, persistence and a strong will.  In the spring of 2018, Dale Robinson of Evolved Ballistics took his Proof Signature Rifle to Vast Alaska’s Exclusive Use Concession to hunt for a trophy Brown Bear. Dale is renown for his his skills as a marksman. Dale found his proving ground in the heart of the Alaska Peninsula in with Vast Alaska.

He saw bears and he saw some wild country. His interest peaked when he saw this Big Boar with a Sow. They worked for a vantage on the Boar, then after a lengthy stalk to maneuver through brush and creeks he and his guide Aaron Wages found shooting alley. Officially scored by Boone & Crockett at 29 4/16, this great Bear squared 10′ 6″. And this 18 year old Bear weighed 1600# and was quite a feat to get out of the field. Although this bear is # 86 in the Boone and Crockett record book, there was never a moment when Dale Robinson questioned wether his shooting ability or his rifle would succeed. Boone & Crockett Brown Bear will test ones patients, preparation and mettle. Video

This Alaska Peninsula Brown Bear adventure took place on a valley in my area. It…

Its about time that Vast Alaska writes about the Best Rifles for Alaska Brown Bear....…