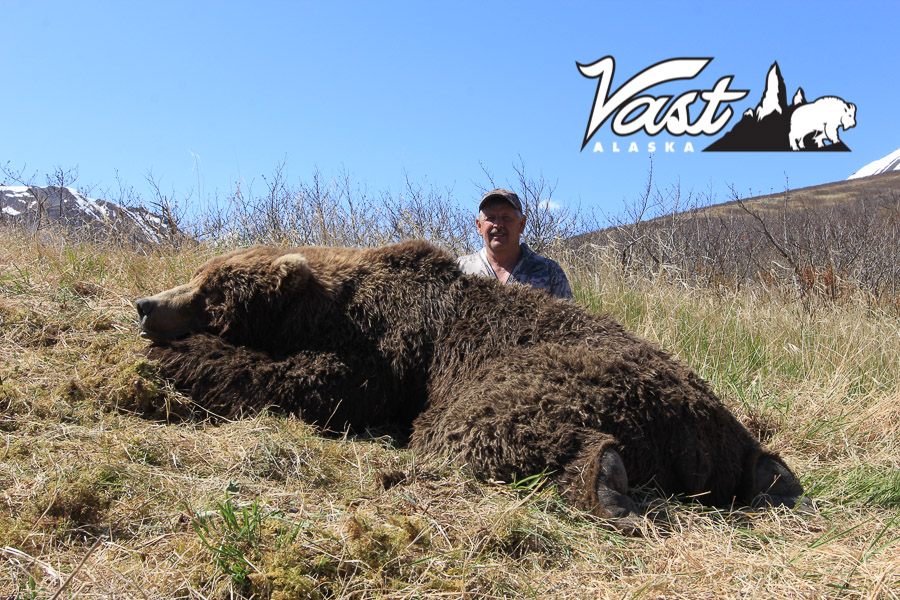 Hunting Brown Bear on the Alaska Peninsula is an intense experience. John Korn arrived in the Spring of 2014. His ambition to hunt the biggest bears on the planet finally came to fruition. Little did he know that we were busy a week prior to his arrival. Flying our area, we decided to establish a new camp in this valley. He arrived and the stage was set, we had put him in the middle of prime spring habitat. Landing the Super Cub at the apex of two major valleys he stepped out and expressed his awe. His camp was surrounded by a matrix of bear trails reaching out to the coast. The sun was unbelievably hot for Hunting Brown Bear on the Alaska Peninsula but it definitely brought the action.

Brown Bears will habituate to human interaction. For instance, if you hunt the same area too long, you can disrupt their balance. Consequently, their habits will change and Bears will become aware. With Spring being an active time of year for Big Brown Bears, this new location was a good situation. The advantage of the Mountainous topography is that the bears will roam the high country trailing the scent of sows in estrous. Also, you can see more on a hill side than you can on the flat terrain. Hunting Brown Bear can be a systematic approach of glassing the surrounding area and the ominous approach of selecting the right bear as a target. They judged both correctly and John found his Gem. Time is of the essence once a stalk has been initiated and you must be present to win.

Pursuit of a Brown Bear

Spring 2016 was a unprecedented year to Hunt Brown Bear on the Alaska Peninsula. Brad…