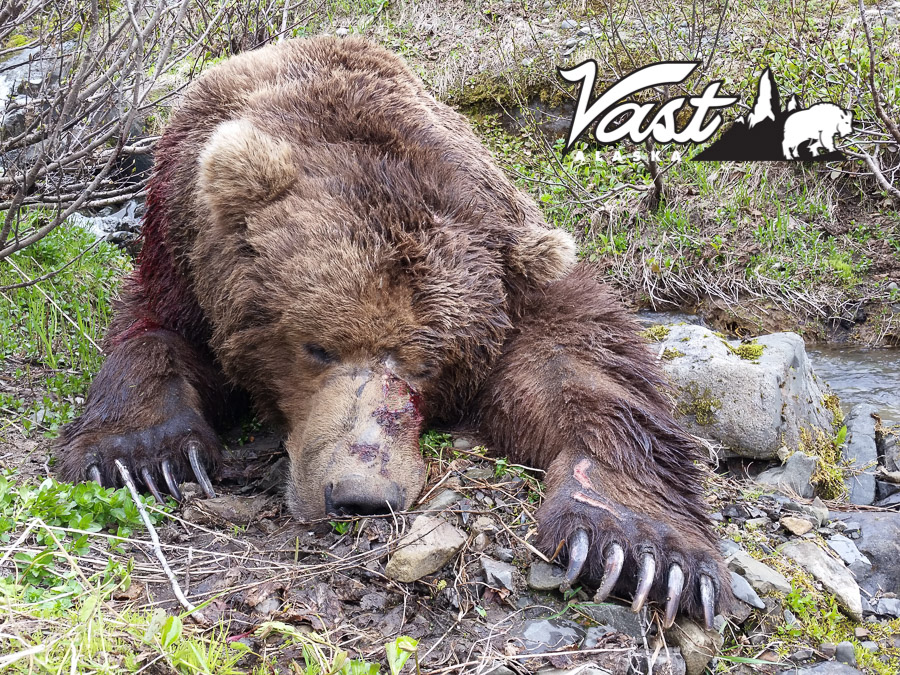 Spring 2016 was a unprecedented year to Hunt Brown Bear on the Alaska Peninsula. Brad Modlin was on a quest for a 10+ Brown Bear with a Boone and Crocket skull.  The Boar he was after was a dominant bear in the valley he hunted.  Brad and his guide Johnny Helton first saw the Boar on top of a mountain harassing a Sow and her litter. The strikingly large Sow with three 1 1/2 yr old cubs tried to evade the bruin. But to no avail, his persistence drove her to do the unthinkable. The Sow left her cubs for the freedom of the breeding season. The cubs were fairing well as seen in the next valley by me and my hunter. They went from suckling to foraging in a matter of days. Bears are highly adaptable, they constantly stretch the reality that we know.

Never the less, Brad and Johnny scanned from a ridge in the next drainage and found the Boar with another sow. He was deep in a brushy ravine, all but concealed by the undergrowth. They muscled through the dense brush to find a good position. Subsequently, they got a shot on him on a shady creek. His scars prove he is a Bruin that fights for what he wants. So this is proof that a Brown Bears life is a harsh reality. I am proud of these two hunters for striking out away from camp taking the clothes on their back and finding adventure. Brad Modlins bear measured 10´2″ squared and had a 28 1/4″ Boone and Crockett skull.  Brad is eagerly waiting for 4 years to Hunt Brown Bear again and of course guide Johnny Helton wouldn’t miss a season either.