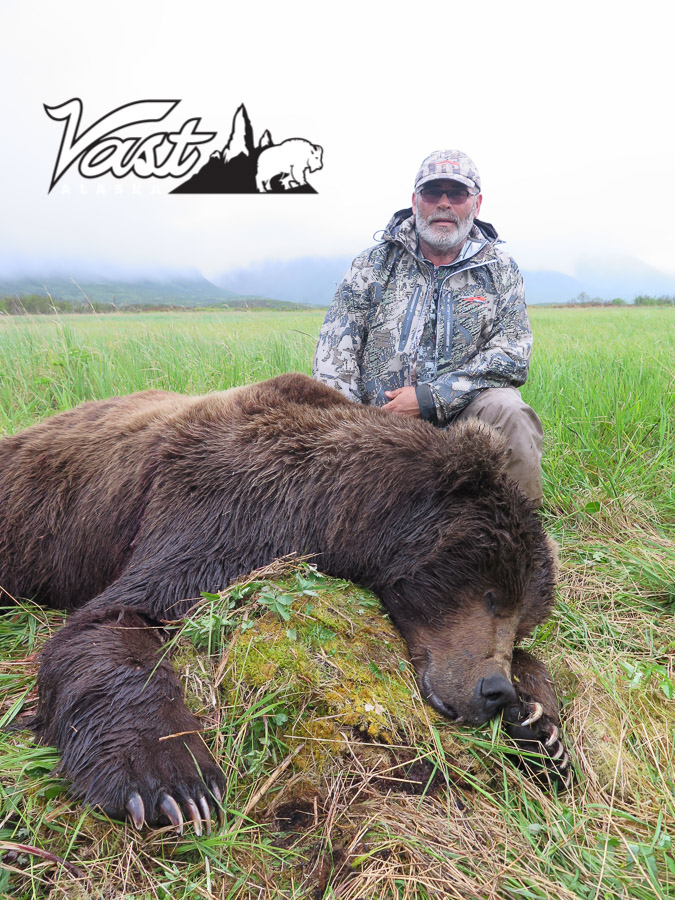 Archery Brown Bear Hunt took an unexpected turn for Russ Sauter. Russ was prepared, he brought a 100# bow with single blade bleeders. Not to mention, his confidence at 50 yards in variable conditions was superb. If that wasn’t enough, Russ made a choice to bring lighter grained gear for 80 yds. Wind is a factor in this region, and in many instances you want to tighten up your range. However, the wind was not an issue on this day on his Archery Brown Bear Hunt. It was a matter of circumstance that his guide (Cash Joyce) told him to use the 2nd rifle that we packed. The stalk went well with a mile + approach. The Bears were none the wiser to what we were planning. When I finally picked them up in the flats, it was in low grass without a lot of cover.

Then this Archery Brown Bear Hunt went to a rifle in the blink of an eye. We had a goal of 50 yds. with his gear and it was day 7. So we hunched behind a dwarf willow in the low grass and quickly contemplated the 75 yards we had to gain. It was a beautiful Bear, the fear that we would lose him was overwhelming. We stayed on the kill and skinned for a sleepless night. In the morning we hiked our loads out to the beach and built a fire to sleep till low tide. I woke and hiked back to our camp for the airplane. Then picked up Russ and the load on the tidal flats and returned to Chignik Bay. A message for anyone looking to go Brown Bear Hunting in Alaska, 90% glassing for 10% of shear adventure. Russ Sauter – 10´ Squared and 27″ Skull Alaska Peninsula Bear Hunting is the milestone of your hunting experience. We took this Great…