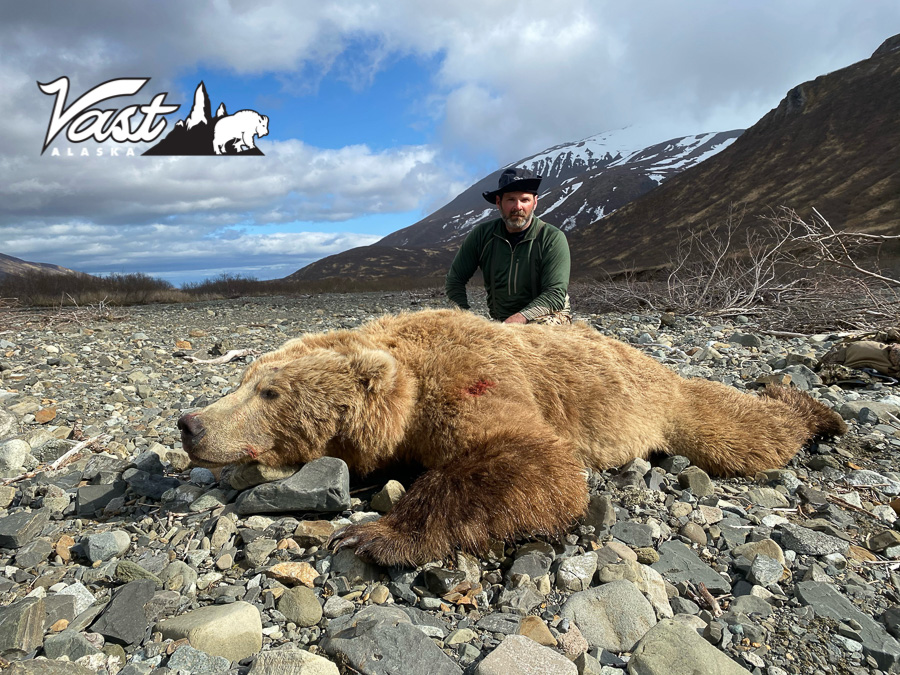 Alaska Bear Hunting Trips in a Refuge Area are hard to find. Vast Alaska not only has Refuge, but they also have leases with Private Land Owners for truly exclusive use of Native Corporation Land. Combined is a huge area of prime habitat for the Biggest Brown Bears in Alaska. We have our own Aircraft to service our remote camps. We are based out of a historic fishing village on the Alaska Peninsula. Commercial Fisherman five generations strong call this home. And the Magnificent Brown Bear has evolved in this rich environment before we mortal men set foot on these shores. The Aleutian Range separates the Pacific Ocean and the Bering Seas, We hunt both sides, on the Pacific side the Mountains rise from the Sea. Their tributaries run the bounty of life for this land, Salmon.

At the head of one of these tributaries, an Alaska Bear Hunting Trip took place. David Norsworthy and his guide Rafe Oliphant spiked out at its headwaters. Surrounded by the prevailing peaks they watched the onslaught of Spring. Brown Bears were starting to move with the change of seasons. What they found was the slow rise to spring like the Pushki and green sedge that are the first foods of the Brown Bear. They held on and found some adventure on this Alaska Bear Hunting Trips. Wild game and wild country, this venue has a history of harvest. They harvested a Mature Boar and experienced something that will change the way you think.

Hunting Brown Bear on the Alaska Peninsula is an intense experience. John Korn arrived in…