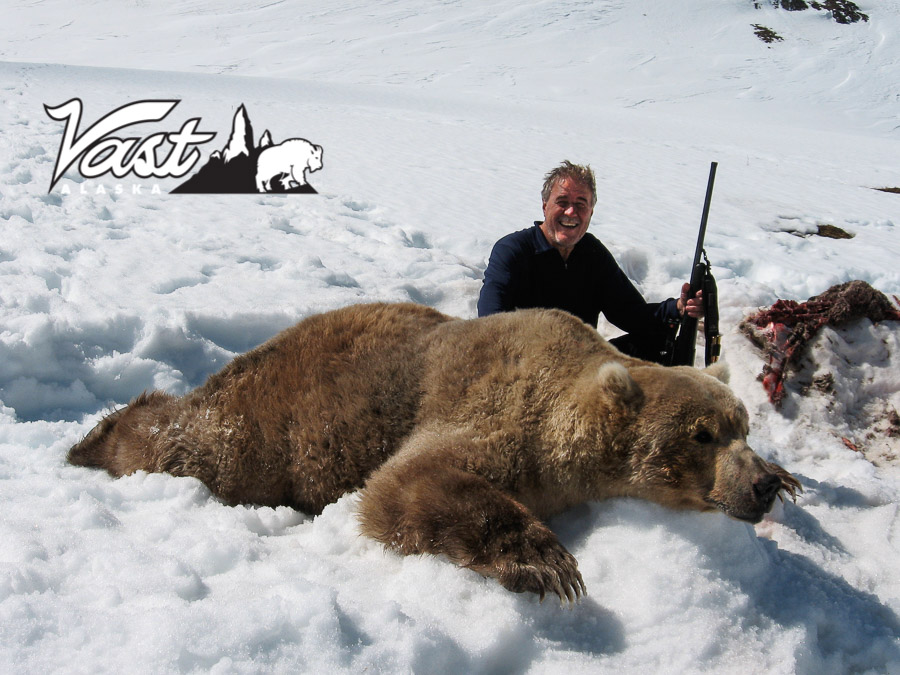 This Alaska Brown Bear Hunting story started in the Spring, with the quintessential Alaska Peninsula winds. Bob Kelus and I were holed up in a Bomb Shelter that we feared would be blown into the Pacific Ocean despite we were on the Bering Sea. We packed up and put our rain gear on and stood inside at the ready. The ground was still frozen below the surface and our tent stakes were at an acute angle. Knives in hand, I gave the order to “cut yourself out if the tent folds and we will hole up in the ravine in my Mega-Mid”. Meanwhile I grabbed my bush saw and slipped out the back door. I clipped some finger sized alders and build a windbreak. They were bedded pretty shallow above the frost line so i kept them sized for wind resistance. Meanwhile, Bob was standing in the tent on the windward side, I know this because i could see a perfect outline of his body inside the tent. I asked him to stand there and keep the tent from collapsing the poles. Eventually i could increase the size of the Alders on the wind wall and we effectively diffused the force of the wind. The next step was to cut 2 big forked alders to brace the windward poles. I found 2 forearm sized alders and cut them off at the forked end. I brought them through the back door and braced the windward poles, leaning the forked ends into the armpit bend.

We hung tight with our strategy for at least 2 days. I went out the back door routinely to double up on tent stakes and make improvements. Once, i startled 5 Caribou bedded just outside our wind fence. They jumped and ran up the hillside. When the Bering Sea Storm finally subsided. We backed off the hillside where we were bedded on and absorbed some sun. It was then that we took note to the 5 sets of Caribou tracks going up the mountain, but only 4 turned abruptly. With a scope, you could see that a Caribou carcass was laying in the snow at the redirected tracks. We spent the day watching an average sized bear feeding on the carcass. It was then that he winded something coming from the NorthWest, it was a lone Wolf. The Bear bounced. Depending on a Bears threshold, determines how he will react. This Bear wanted nothing to do with what he determined was Wolves. But instead, a lone Wolf came to the scene and relished a full stomach. About that time this Big Boar comes over the ridgeline and marches down on this Caribou kill. The Wolf had long gone at the first sight of a legitimate bear.

Our Bear distinguished himself as the fair owner of this Caribou by laying on it. We made a loose plan amongst ourselves and slept on it. Secretly, I dreamt of the kill sight and the fact that it looked like I could find a place where a Super Cub on wheel skis could land. The life of a guide, we actually had a Super Cub on wheel skis at the Mouse House. That would beat me packing a Big Bear hide off the mountain. The next day we made our approach, the last of it revealed an unaware sleeping Bear on the kill site. Bob killed the sleeping Bear with a deft shot with his Winchester 458 and 500 grains of Nosler. Meanwhile, I used a stuff sack on his ski pole and put up a windsock for the ski plane. Then i commenced to skinning this Bruin. It was a fabulous ending to a tumultuous start. That season, the Alaska Peninsula lost a number of tents and a couple of airplanes due to the wind. Bob and I on the other hand, were living the dream Alaska Brown Bear Hunting.

After i put the heavy hide in the belly pod of the Super Cub, I took the free ride down. Bob got his first dose of Glissading down a mountain. Something us climbers are known to take advantage of. All in all, I guess the take away from this story is, don’t fear the unknown, Alaska Brown Bear Hunting is always and Adventure.