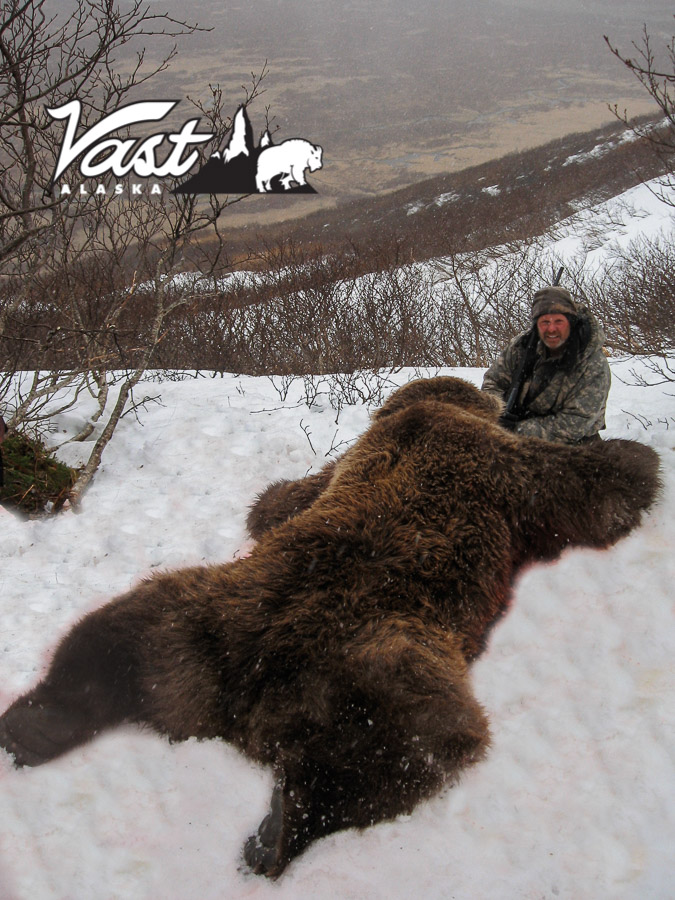 Alaska Peninsula Bear Hunting is the milestone of your hunting experience. We took this Great Bruin during the month of May. Thats when we start our season, as the Bears are emerging from their dens. It’s on the cusp of the breeding season for Brown Bears on the Alaska Peninsula. During this timespan, there is an innate drive for mature male Bears to pass their seed. Nose to the wind they travel the high points and into the valley bottoms searching for Sows in estrous. This Boar was chasing a Sow with year and a half old cubs. He wanted to kill her cubs to sire his own bloodline. And we watched his relentless pursuit daily.

She took her posse of cubs above bush line to get away. And lead them down the ridge a couple of miles then double backed on the other side. The blowing snow limited visibility, it pelted and stung our faces. So the pursuing Boar was now ground scenting. We intercepted the melee and placed ourselves in their path. As planned, the Sow and her Cubs ambled by and caught our wind. She blew a few snorts and quickened her gait. Meanwhile our Bruin was laying half over a cornice looking down for the Sow and Cubs. He let it rip. Sliding down in the snow on his tail to a level contour with us,,, into the crosshairs. As we descended off of the mountain that day, the winds ramped up to 50 mph and gusted 70 mph. Small rocks from the creek bed lifted in the gusts. For Lee Grommet, his Alaska Peninsula Bear Hunting tour was over mentally, but how he wished it would go on. 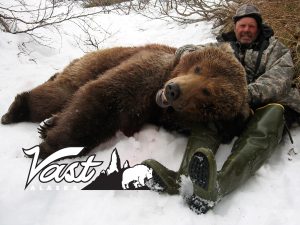